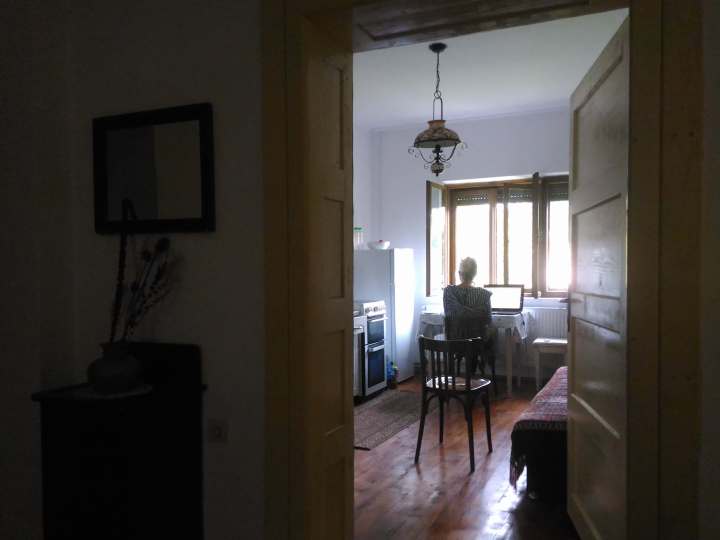 * First night: accommodation in the public Hotel Triumf in Bucharest where, during the communist regime, Nicolae Ceaușescu hosted his official guests. The hotel has never been renovated and is still furnished as it was at the time.
Here we made acquaintance with another guest, a Romanian who emigrated to Denmark years ago, and who had changed his surname to ‘Dakiensen’, which in Danish means “son of the Dacians”. 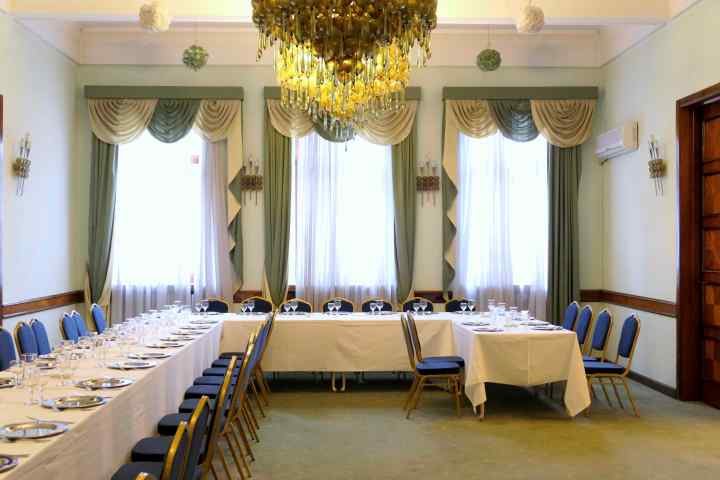 * Second day: visit to the National Village Museum “Dimitrie Gusti” in the capital, an open air museum of rural houses founded in 1936 to strengthen the sense of national identity of the new Romania, unified after the First World War; a full immersion experience of how it was living in Romania regarding the architecture of houses built from the end of the 17th century up till the mid 1900s. The houses have been dismantled from their originary places and rebuilt here. 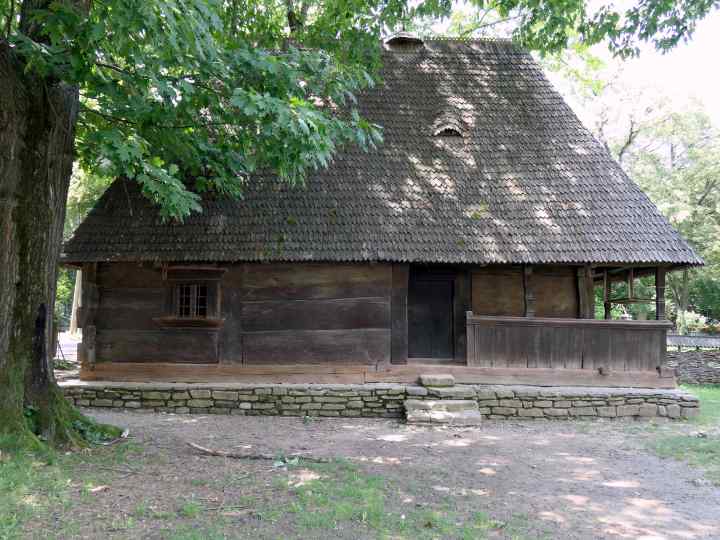 * Late at night we arrived at the Intersecția house, in the village of Brădet, Întorsura Buzăului, and I was introduced by Emanuela to the house of her Romanian grandfather with a sort of affectionate ceremony as she showed me with huge respect everything down to the smallest detail that had been done in order to restore and fulfil, at least in part, the dream of her grandfather and the original project for the house, that had been interrupted shortly after the beginning of its construction, in 1947. When I asked why it had never been finished, she answered me with great naturalness “because of the expropriation of my grandfathers lands…and its consequences, that came with the arrival of communism….”. As we later entered the room, that was supposed to be mine during my residence, I immediately noticed a small bird flitting around frightened by our appearance, and my host exclaimed: “it is here for you!”…. as if the bird had been sent as ‘cosmic awareness’ of my arrival to that house.

* During the night, I had a dream that carried a clear image of a house in which I saw myself inside in the upper part looking down where I noticed a flowing river, as if the house had been placed directly on the ground without a floor.

My very first intuition of the dream at my awakening in the morning brought me a perception of an immutable connection between the house and the earth on which it was situated. That reminded me of the sensation, I had had in the evening before about my host’s strong yearning to reconnect to the Romanian land of origin through the care and attention she lavished on her grandfathers house. * After a long day of experiences resulting in a night of distinctive and ‘talking’ images, all these events by the morning of my third day in Romania, arrived in the form of a striking vision that the concept of ‘house’ ultimately could be conceived as the symbol of man’s physical/direct bond with the land and the soil; the necessary condition between him and his environment, a three-dimensional frame ‘society-space-time’ and an essential ‘protective’ prerequisite for his survival.

In an anthropological essay ‘Mente Locale’ that I was reading in those days, I later found a quote of the French philosopher Emmanuel Levinas, that aligned my intuition with his considerations about the ‘house’ as man’s primary “property” and the “the privileged place for retreat/refuge”; which moreover opened up the question about ‘property’, inherent to the ongoing debate about the right to territory in general. (In Franco La Cecla, Mente Locale. For an anthropology of living, Elèuthera, 2011.) * In the evening, it unexpectedly became the subject for further reflections. Invited for dinner by some Emanuela’s relatives, all seated on the veranda under a long sunset that slowly took us towards the night, I had the occasion to partake in an increasingly animated conversation between them and some other guests, all of Romanian origins, who ended up arguing about what being Romanian really means and how it should be defined. As I could only understand a few words now and then, I became a mere spectator for which reason I could concentrate on the reading of the vehement emotions which were manifested during the discussion. The relatives argued that it had to be based on the documentation of historical facts, while one of the guests stood fast on the idea, that it was to be represented by common values and daily things that all Romanians could identify with, for example Savoy cabbage and potatoes, typical ingredients in the Romanian kitchen, and that the land belongs to them because they have always cultivated those vegetables there, although it does not leave traces nor ruins. The discussion became more heated when the disputed issue about the Hungarian community that live in a considerable part of the Romanian territory came up.

* By the fourth day, I noticed that the focal point of the ‘house’ had unfolded a wave of contemporary topics, worthy of further pondering in that context, and all of them in some way linked together. 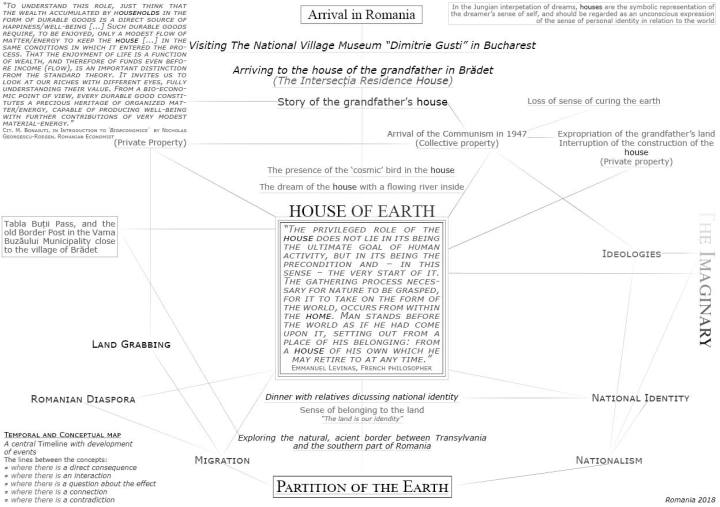 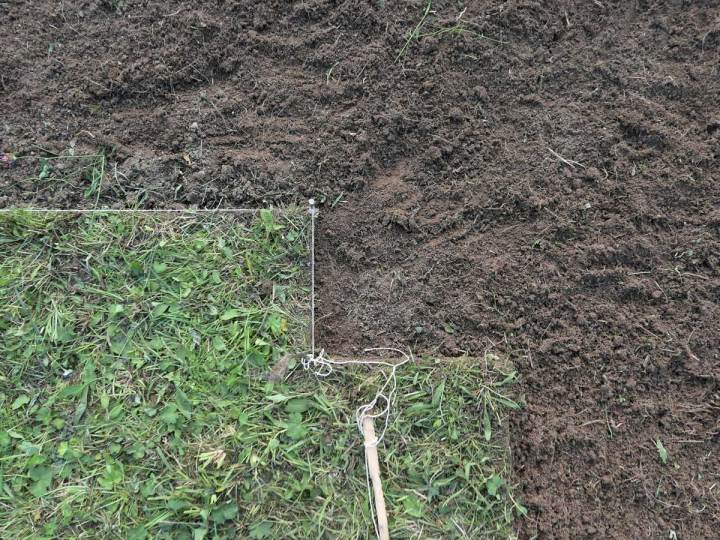 * Following days: I started exploring the surroundings and learned about an ancient historical and natural border, the Tabla Buții Pass, which is 25 km far from Intersecția house. I realized we were living in a border land.

The Pass, which dates back to before Roman times, is at about 2000 meters altitude, and it had been one of the most important and used border crossings between Transylvania and the Valacchian region in the south, separated by the Carpathian mountain chain. As its old Border Post was situated less than 10 km from the village of Brădet, in the Vama Buzăului Municipality, and the road towards the pass showed up to be an intriguing piece of landscape inhabited by nocturnal birds with a mysterious pulsing song, and bears with whom we even had a close encounter one evening, it immediately attracted my curiosity for additional investigation also because of it being an emblematic example of man’s eternal wandering on the Earth. 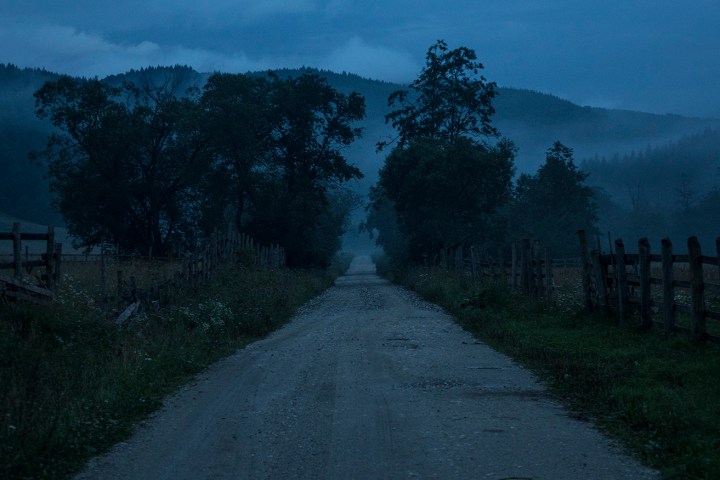